This month we caught up with Wizdom Layne, founder of How 2 Make A Living and Delivery Partner for Tileyard Studios’ IMPACT work experience programme which connects young people to creative businesses, helping to boost their networks and experience in the industry. He also runs a modelling agency called Fully Clothed Beauty (@fullyclothedbeauty_). 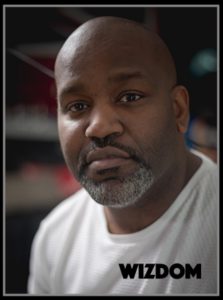 He has been a passionate supporter of Urban Partners and is proud of the positive changes being made in the area. We’d like to thank Wizdom for all the hard work he has done to make our area a better place to live and work, especially for its young people wanting to join the creative industry.

I’ve been at Tileyard Studios for just over a year but I have worked in schools in these boroughs since 2012 with XLP.

It’s nice to see the hoardings finally come down at Coal Drops Yard and Universal Music move into their building. At Tileyard we’ve seen a new Health & Wellness centre. Tileyard Education has opened to a second year of MA students, plus Two Tribes Brewery. Things move fast in a year around here!

I had the opportunity to stand on the balcony of Havas looking out over Central Saint Martins and the fountains (it’s a pretty awesome view ), but to be honest my favourite place is Maiden Lane estate in summer. It’s such a beautifully designed place. I love the 1960s white walls with red brick floors and pizzazz and I really love the vibe there working at the community centre. There’s always a pleasant surprise when I bring people through there.

As a creative person, the potential and variety here is unreal! I remember seeing Chase N Status rehearsing in Sensible Studios in Brewery Road and having to leave there to go and meet a friend at Google. The 15 minute journey between two very different creative worlds is so cool and it’s great to be able to walk there.  Also, the variety of people I have met just sitting in Vinyl Cafe at Tileyard is why I work from there most days rather than trudging up four flights of stairs to my office desk! Having so many high-level creatives in one area is a dream for me.

I had the chance to work on Cally Fest on Caledonian Road a couple of years back with XLP, and Tileyard are hoping to support the CYP youth stage this year with music industry training for the participants, so I am really looking forward to that. Also, the Everyman Cinema is really cool but the fact they don’t do Meerkat Movies means that visits are limited!

When CPP bought Tileyard from Alan Sugar about 10 years ago the location really wasn’t the nice end of Kings Cross. There were 72 people rattling around in an industrial estate of nearly 150,000sq ft.

CPP invited Nick Keynes to bring Amplifi Academy music education to Tileyard Studios and Nick asked if he could build a studio. Four other studios were built including ones for Mark Ronson and Basement Jaxx. Soon their management companies, labels and all sorts of others creative businesses started moving in.

We now have 150 businesses, alongside 82 private recording studios at Tileyard, with about 1,200 people employed here. The funny thing is that my wife used to work at the Racial Equality Foundation (no longer residents) in 2010 just before the transition, in the building where the Prodigy now have their studio. I remember giving her directions to get there for her interview having no idea that I’d be working there 8 years later!

Am I allowed to say mine…lol! I’m really proud of the Tileyard IMPACT work experience programme because it gives young people and the local community access to the actual creative industry.

Work experience often doesn’t work in our industry because small impactful companies don’t have enough resources to assign someone to hand-hold a newbie, so they get stuck doing administration tasks around creativity, but are rarely allowed to use their creativity.

Our programme puts young people aged 16-25 into a week-long creative work project where they interact with a number of creative businesses, many of which are based in the area, to achieve a set goal. This helps the young people build their experience and networks and that’s more useful in the creative industry than many qualifications.

Also, understanding how the system works and discovering where you could fit are really important factors for finding success in our field. Unfortunately, schools and colleges struggle to teach that so it has to come from industry and I’m so glad that we’re doing it and I’m seeing the difference it is making already.

I think there is always a danger when you create something that is aspirational for some, to them, it appears to be a “table for cool kids” to which they aren’t invited.

I worked in Tower Hamlets, and Canary Wharf is akin to a spaceship that descended in the middle of the borough which could really benefit from the wealth it generates. Instead, it seemed to create an invisible force field that the local community feel is impenetrable. The fear of embarrassment often quells the curiosity of the disadvantaged and very few people I have met from Poplar or the Isle of Dogs even aspire to be part of it as they have been made to feel the world of commerce and finance is not for them.

The St Pancras Basin is becoming the hub of the creative industries in the UK so we have to make sure we establish access routes, whether that be in transport (like opening a zone 2 station at York Way on the Overground line between Camden Road and Caledonian and Barnsbury) so local people can get to jobs on the basin without having to pay for zone one; to giving real routes into entry level jobs; but also to explain that a barista in Google’s in house coffee shop probably makes as much as a teacher’s starting salary. Which also means they are in the building where they might bump into the head of HR one day in a lift.

As connected as we are from KX to Paris with Eurostar we should be just as connected between Somers Town and Copenhagen Street physically and emotionally and that’s a challenge I want to be part of finding solutions to.

The St Pancras Basin will be the Hub for creative industries and I would be so proud if we are able to crack the dilemma of extreme wealth next to poverty which sadly is a reflection of the two boroughs we are in.

I would like to see an acceptance that while not everyone can own a yacht there are those who might be trusted with the keys if we can find a way to develop meaningful relationships.

Creativity and the arts are great ways to do that and so I would love to see this develop, get it right and be able to show others how to do that too. The prospect really excites me and I’m so pleased to be here at a time like this.

“Hell down, heaven down,

Livin’ in the same town,

Tryin’ a find something new”

There is a sense that whether you are in a privileged position or a difficult one, we are all trying to build something new here.

The speed of change is often overwhelming and can be quite frightening but being involved in shaping it is thrilling and I think we can create something amazing! Who would have believed that The Cross nightclub would become Coal Drops Yard, although that’s not quite the same as Bagleys becoming Waitrose?!