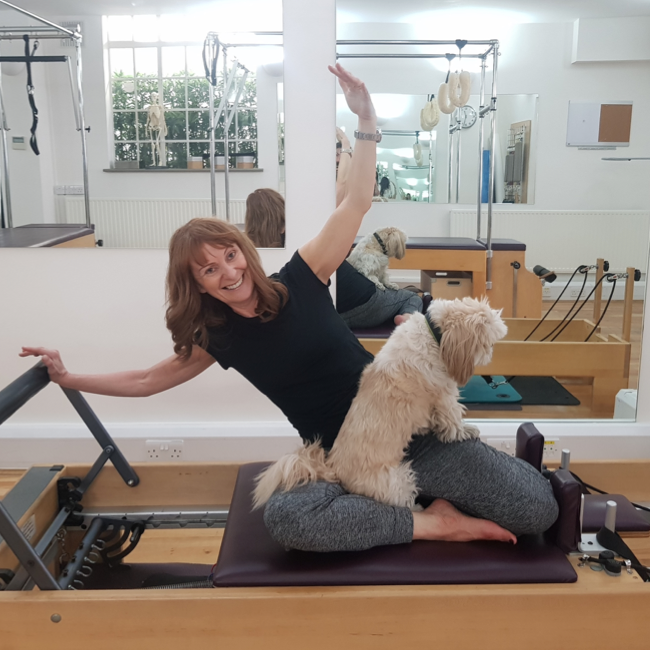 Julia Moss is the co-owner and founder of Moss Pilates. She first found an interest in Pilates after finding that it was the only thing that let her maintain her daily 12k routine after countless other therapies and treatments failed. She decided that she wanted to share this with others and subsequently studied with Polestar Pilates in 2001, qualifying as both a mat-work and studio equipment practitioner. In 2006 she co-founded Chiswell Studios in the City of London with renowned Polestar educator Elizabeth Bussey, before opening Moss Pilates in Shoreditch in 2009 and then in King’s Cross in 2018. She also became the UK licence holder for Polestar Education in 2009.

“I now take great pleasure in helping other people use Pilates to make their lives better in ways they couldn’t have thought possible” Julia said, just before sprinting off down the tow path of the Regents Canal.

1. When did you start working/socialising in the area?

We first viewed what would become our new studio on the ground floor of the Aga Khan’s beautiful Victoria Hall building on Canal Reach in the Autumn of 2016. We started our build in September of 2017 and opened the doors in March 2018. At the same time we moved into a flat in Fenman House opposite so we could be close to the new premises and soak up the local atmosphere.

2. How has the area changed since then?

In three and a half short years we have seen significant new developments – we were thrilled with the opening of Tom Dixon’s Coal Office in the Spring of 2018 and a few months later excited with the furious frenzy of the final couple of months prior to the opening of Coal Drops Yard. We were also delighted to learn that we wouldn’t be alone at the northern outpost of KX forever when we heard that Facebook were moving their HQ just to be next to us! We’ve been amazed at the speed at which their four sectioned building has mushroomed and have forgiven them the loss of the view of Primrose Hill from our apartment…!

3. What’s your favourite place in the area and why?

We love to walk our ShihTzu, Toffee, around the development every day – she particularly enjoys a frolic in the Gasholder Park.

4. What do you love about our neighbourhood?

The growing sense of community, the familiar faces interspersed with a diverse pageant of new and unfamiliar faces! It is truly fascinating to see how much the area has changed over recent years. It’s amazing to think that only a few years ago the site was effectively derelict and now it is a thriving community that embraces all walks of life and regards local independent businesses in the same light as the big global companies.

5. What’s your favourite community activity in the area?

Seeing dozens of construction workers limber up on Lewis Cubitt Square with some exercises before heading off to work. Also, it’s fantastic to see all the local families, workers and residents using the fountains to cool down in the summer months – it really shows how King’s Cross has evolved into a community hub!

6. What is your favourite aspect of the work Urban Partners does?

The objective of creating an inclusive community. Urban Partners acts as a bridging point for businesses in the area to not only engage with each other, but also the local community. The different UP networks provide a space for people to connect and share their expertise, and encourages idea generation and collaborations.

7. What’s the best community initiative you have seen in the local area?

We have worked with and continue to support what OnlyConnect are doing in helping recently released prisoners integrate back into the community. We feel passionate that those who leave prison should be given the opportunity to become part of an active community. This is something that we think has been really successful in the King’s Cross area, especially when Redemption Roaster opened last year – it really seemed to be a turning point in breaking those barriers down.

8. What challenges will the area face in the future?

It will be very important to ensure that current and future residents and workers in the area continue to engage with the local businesses. It would be a shame to see the distinctive and independent players replaced by corporate chains due to lack of footfall.

9. Where do you see our neighbourhood in the next ten years and what kind of image will it have?

Our vision is for a diverse and thriving social and commercial environment which continues to surprise and delight the existing local communities and visitors from all over the world. We would also like to see the area establishing a strong connection between the global companies and independent businesses, where they not only sit side by side, but actively engage and support one another and the local community.

10. What famous quote would you use to describe Urban Partners and why?

“..If you build it he (they) will come..” from Kevin Costner’s Field of Dreams.