On Tuesday 13 November, we were thrilled to hold our final PA event of 2018 with renowned celebrity chef Marcus Wareing, who holds a Michelin star at his restaurant ‘Marcus’ at the Berkeley Hotel, Knightsbridge.

The highly anticipated event, held at The Gilbert Scott in the St Pancras Renaissance Hotel, was part of the Urban Partners Benefitting Employees project in which we aim to ensure those working in King’s Cross, Euston and St Pancras feel a sense of ownership and connection with the area. 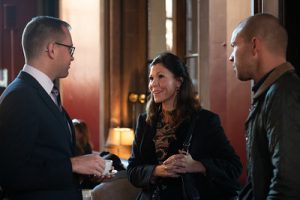 On the day, attendees were welcomed with a light breakfast comprising of a selection of freshly made pastries, homemade honey granola with seasonal fresh fruit and natural yoghurt, and a selection of piping hot teas and coffee. Conversation was flowing as attendees networked and became acquainted with other employees working in the area.

An interactive Q&A session with Marcus followed the breakfast and he discussed his family background, the countries he has lived and worked in, including his experiences in New York and at a two-Michelin-starred restaurant in Paris, as well as his collaboration with Gosset to create his own ‘Marcus Champagne’. Marcus named Gordon Ramsay as one of his biggest inspirations when his career took off and described the two years he worked for Ramsey as “like working for the SAS.” Marcus also spoke of his enjoyment of his role in TV programme Masterchef: The Professionals, describing how he likes to guide contestants and inspire them to keep moving forward and improving, and how discovering the ‘next big talent’ being his favourite aspect of the show. When asked for his ‘Desert Island Dish’, without hesitation Marcus responded with “roast lamb, with lots of thick gravy (his northern roots shining through) and a seriously good bottle of red wine.” 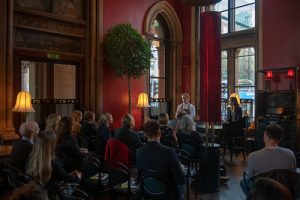 After the Q&A, attendees enjoyed a tour of George’s Bar, the restaurant’s private dining rooms, the wine cellar and most impressively the Chef’s Table, located at one end of a fast-paced but strangely silent kitchen. The Gilbert Scott, a renowned restaurant in a Grade II listed, nineteenth century building, was a stunning location to hold such an impressive event and opened the world of high-end hospitality to a much wider audience.

To conclude, the event was hugely successful and we have received positive feedback since the event. One example of this comes from Mary-Jane Eva, Executive Assistant at University College London:

“Thank you for the fantastic event that you organised. It was wonderful! It was fascinating listening to Marcus speak and great to hear of his enthusiasm for the local area too. And the surroundings were amazing!”

Thank you to those who attended PA events throughout 2018, we look forward to seeing you at future events in 2019!